WITH
Phoenix Kazree
Tamara “Cuchira” Levinson
Carolina Ramos
Bernardo Ricou Gama
​
WHAT IS IT?
​Pole Heart is a project based in Lisbon, Portugal, by Carolina Ramos. The main part of the project it’s the pole studio which is focused on the teaching of Pole as a fusion of acrobatics and dance in an artistic and sport context.

In five days you will have an intensive training learning from amazing professionals in the field and experience different classes.

You can apply what you will learn by creating your own pole pieces for classes, shows, performances and / or championships.

The working language is English.
WHO IS THIS EVENT FOR?
This event is for everybody interested in a more artistic and creative approach to Pole and is interested about pole dance composition and pole movement research.

We advise to have at least 2 years of regular pole classes and training.

​You can be a pole student or pole instructor.

​
WHO ARE THE TEACHERS?
PHOENIX KAZREE
Phoenix Kazree is native of Los Angeles, CA.  She is a former gymnast and is trained in classical, contemporary and ethnic dance styles. Her dance training includes the Alvin Ailey American Dance School, Joffrey Ballet, The Los Angeles County High School for the Arts, and 2 years on scholarship with Bella Lewitzky. Phoenix has been dancing professionally and teaching dance since graduating high school. She traveled the Americas with the touring company of a hit Broadway show for 13 years. Her latest accomplishments are earning the title of Female Elite Champion of Pole Art Italy 2015 and Vice Champion of the female professional division of the Pan American Pole Championships 2015 in Rio de Janeiro, Brazil. Phoenix was also 1st Runner Up at 2014 Pole Stars Championship in Kuala Lumpur, Malaysia. She is the 2011 California Pole Dance Champion, and the 2nd place winner of the 2011 and 2012 American Pole Fitness Championships. She was a finalist in the 2011 and 2013 Pole Art Competition in Helsinki, Finland and she placed 4th in Pole Art 2012 in Stockholm, Sweden. Phoenix was also a finalist in the 2014 Pole World Cup in Rio de Janeiro, Brazil. Phoenix was awarded for "Best Show" at Aerial Pole International Competition 2012 in Bern, Switzerland. She also earned the award for "Pole Athlete of the Year" at the APFC 2011 and La Pole Battle Montreal 2011.

CAROLINA RAMOS
Carolina Ramos is an experienced and professional dancer, pole artist, choreographer and teacher from Portugal. She is the owner of Pole Heart Studio as well as the artistic and pedagogic director and teacher. She has a B.A. in Modern Dance by Fonty Dance Academy in Holland (2003). She is an ElevatED certified Pole Instructor Level 1 and Level 2. She participated in International Pole Fusion 2016 (3rd place) and Pole Theatre Paris 2016 (5th place at Professional Art Category). She has been a judge in Pole Art Portugal 2016 and 2018. She is the owner and organizer of Lisbon Pole Camp.

TAMARA “CUCHIRA” LEVINSON
Tamara Levinson AKA Cuchira was born in Buenos Aires, Argentina. She competed in the 1992 Olympic Games in the sport of rhythmic gymnastics. She was a three time National Champion representing the USA in international competitions. After her eighteen years on this earth as a well-oiled athletic machine, she moved to New York City to find her human side. New York City not only became home, but a playground for self-discovery and movement became the biggest lifetime tool she gained in that adventure.
There she fell in love with all forms of movement, dancing every night at underground clubs and taking all sorts of classes during the days. Her exploration was endless. Her versatility led her to having an over 20 year career as a professional movement artist and choreographer. She fulfilled her dream of dancing on multiple world tours with Madonna and alongside countless other well-known artists. Her love for live avant-garde theatre and performance art coincided with her Argentine roots when she joined the original NYC Off-Broadway cast of “De La Guarda”. She later formed the creative team of the hit show Fuerzabruta, NYC and internationally.
Ms. Levinson’s greatest passion and proudest venture to date is her creation of MovMEANT. Guiding students internationally through this profoundly intimate experience drives her endlessly. She teaches from gut instinct with pure love and passion for her students and her art. Curiosity drives the constant progression of MovMEANT. “A sense of curiosity is nature’s original school of education.” Every class she teaches is different. It’s ever changing, just like ourselves and our world. Come experience freedom. You are meant to move!


​
BERNARDO RICOU GAMA
Bernardo Gama (Angola, 1968) is a Gyrokinesis ® Master Trainer and Gyrotonic ® pre-trainer in Lisbon, Portugal and he is one of the founders of Equilibrium Studio, a wellness and holistic movement center. In regards to his Gyrotonic/Gyrokinesis training, he has studied with the following: Juliu Horvath, Hillary Cartwright, Leda Franklin, Paul Horvath, Rita Renha, Miriam Honório, Miriam Barbosa, Magali Messac, Martin Laemerhirt, Sebastien Plettemberg, and Lisa Marie Goodwill, among others. He has given Gyrokinesis workshops at schools and dance companies in Portugal, Spain and Brazil. He holds a Master’s Degree in Dance and Performance Art from FMH (Faculty of Human Movement Sciences), and his thesis research was on the ever growing connection
between Contemporary Dance and Contemporary Circus. He is also a teacher of the method Danceability ®. A method that dissolves barriers and connects people with and without disabilities through dance and movement.
He also taught Contemporary Dance and Choreography at ESTAL (Higher Institute for Technology and the Arts of Lisbon).
In Rio de Janeiro, Brazil he studied Performing Arts at the Teatro Tablado from 1985 to 1987. He has danced for several important dance companies, such as Grupo Corpo (Brazil) 1987-1993, Companhia Nacional de Bailado (Portugal) 1994-1995, Cullberg Ballet (Sweden) 1995-1997, and Compagnie Philippe Saire (Switzerland) 1997. After that, he was a soloist in the Ballet Gulbenkian (Portugal) from 1997 to 2005, when the company closed. While he was with Grupo Corpo, in 1989, he received the Best Dancer award from the São Paulo Association of Art Critics. In addition to working as a choreographer and actor, from 2005 to 2009, he also taught Contemporary Dance and Movement at EPAOE (School for the Circus Performing Arts/Chapitô) in Lisbon. He also participated in many community outreach projects that used dance and circus performance. He has given many workshops related to creative dance and artistic expression. In 2008, he joined the cast of “Cabaret”, the show ran in Lisbon at the Maria Matos theater from 2008 to 2009. In 2011, he directed a circus performance piece entitled “Cadernos Suspensos” (Suspended Books) at Armazém 13 (Circus Arts Company) in Lisbon.

​
WHAT KIND OF CLASSES?
STATIC AND SPINNING POLE TECHNIQUE by Phoenix Kazree
In these classes you will learn amazing transitions, tricks and combos from Phoenix Kazree in both static and spinning pole.

FLOOR MOVEMENT by Carolina Ramos
These classes are about going on the floor in a contemporary way and learn beautiful sequences on release technique style.
Floor work changes the relationship of the body to gravity working at a low spatial level. Through movement and dance exercises we will work on the transfer of body weight in the floor, functional strength, muscular control, dynamic flexibility, joint mobility, body awareness and our kinesthetic body intelligence (balance, ability, speed, strength, dexterity) as well as using breathing and musicality as a way to enhance lightness and fluidity of movement.

LOW POLE FLOW MOVEMENT by Carolina Ramos
Precision and flow is in the core of this class. Learn sequences on the base of the pole that will enhance the transitions of movements in a fluid way.

CONTEMPORARY POLE CHOREOGRAPHY by Carolina Ramos
In these classes you will learn a contemporary pole choreography that makes the fusion between pole and contemporary dance in a fluid language with the use of floor work as well.

CREATIVE POLE RESEARCH by Phoenix Kazree and Carolina Ramos
In these classes you will learn different exercises to explore your movement on the pole and use your creativity to discover your own movements and transitions on the pole.

MOVEMENT INTERPRETATION & PERFORMING SKILLS by Phoenix Kazree and Carolina Ramos This class is all about expression and stage performance skills. Learn how to enhance your movement interpretation and your stage presence to fully communicate with your audience.

POLE COMPOSITION by Phoenix Kazree and Carolina Ramos
In these classes you will learn how to create and compose your pole choreographies either for your pole classes or competitions.

YOGANCE by Cuchira
Yogance works both your mind and body, giving each a unique opportunity to play with one another in a way they never have before. While dance can be intimidating to most, Yogance pulls from multiple inspirations to become approachable and something you can truly make your own!

MOVMEANT by Cuchira
Emotional memory is stored in the mind-body. It lives within every crevice of our being. MovMeant Therapeutic Arts releases the mind-body of stored trauma to bring forth healing through a felt sense creative process. Not all feelings can be expressed verbally. MovMeant supplies a safe space to explore our emotional landscape by physically moving our way into our internal aura. MovMeant will guide you towards reconnecting body-mind-soul by using various movement practices, explorative exercises, vocalization, breath and imagination to assist in your self-love journey towards a more peacefully connected you.

GYROKINESIS by Bernardo Ricou Gama
Gyrokinesis is a method of movement that follows the principles of yoga, chi-kung and dance. Its approach is based on the circularity and fluidity of the movements, simultaneously enabling the stretching and strengthening of the muscles, increasing the mobility of the joints and promoting greater motor coordination, with reduced strain and effort. Fluidity is key, the postures are not static. Instead, they are interconnected and rhythmic, accompanied with regular breathing. The awakening occurs with self-massage to restore the body, prevent injuries and be more in tune with your inner being.
THE SCHEDULE
WHAT SHOULD I EXPECT?
WHERE IS THE STUDIO?
This city event takes place at Pole Heart Studio, in the beautiful city of Lisbon, Portugal.

The studio has all the conditions for a safe pole and movement practice with 6 professional and removable poles and AC.
​
There are no showers in the facilities.

Google maps: https://goo.gl/maps/Qm6EFj94gnv
HOW MANY PARTICIPANTS?
Only 10 participants will be accepted.
​
We will work on 2 people per pole and 1 pole for the teacher.
HOW MUCH IT COST?
1100 Euros

It includes:(It only includes the bio menu - soup or smoothie, 1 main dish (vegan or fish), tea and coffee.)
Not included: accommodation, flights and other meals
​
HOW CAN I MAKE MY REGISTRATION?
Fullfill the registration form on the link below.

Registration it’s only completed after full payment.
HOW CAN I PAY?
​
Payments can be done in full or by installments.

Contact us so we can send you the payment details. 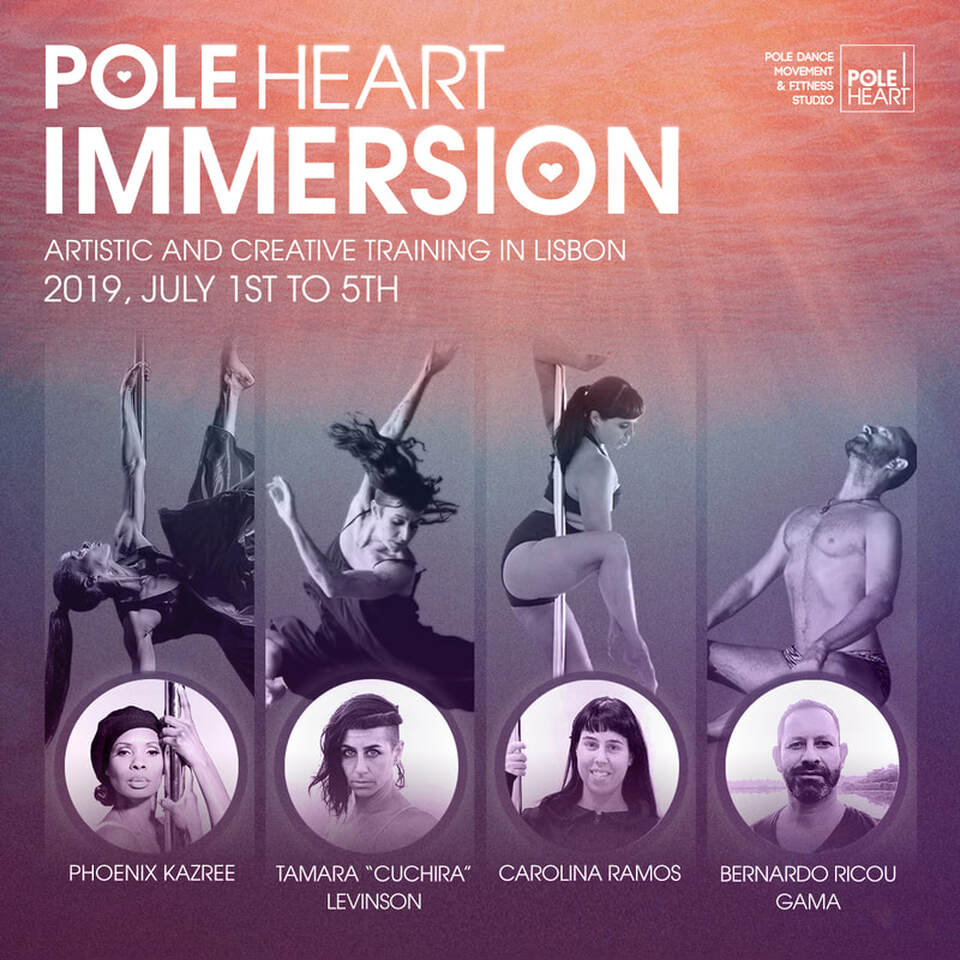